Bit of History about Crown Caps for Beer Bottles

Crown caps for beer bottles were invented and patented in 1892 by William Painter. The crown cap originally had 24 serrations and was 6.75 mm high. Over a hundred years have gone by since the invention and now, thanks to the introduction in the 1960s of new materials (PVC-plastisols), it has become possible to reduce the number of serrations to 21 and the cap’s height to 6mm. Ever-greater quality demands as well as environmental and health concerns led to the development in the 1980s of PVC-free granulates which are now used almost exclusively in the manufacture of crown caps. Apart from their functional advantages, such as better handling and greater application speed, sealability and tamper-resistance, crown caps are an ideal way to advertise a brand’s distinctive identity.

Standard crown caps come in 3 different types of metal: tin- free, tin-plated and stainless steel. In terms of quality and price there is no difference between tin-free and tin-plated but they do have a slightly different appearance (tin is shinier). Stainless steel is used in cases where problems with corrosion make the use of original tin-free or tin-plated options impossible (e.g. in tropical climates or where products are stored in ice water).

Soda companies particularly use crown caps for promotion. A message is printed on the inside of the cap and people with the right message may win a prize. Since the bottle must be purchased to determine the message and win, people usually purchase more of the drink to increase their chances of winning. Some companies print interesting facts, riddles or games on the inside of caps.

To learn more about our crown closures, please visit: https://www.viscoseclosures.com/crown-closures/

Posted in News | No Comments » 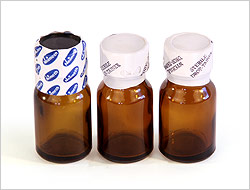 Viscose supplies Printed biodegradable secondary seals, that shrink in the natural environment. Printed designs on Viskrings / Celons normally take the form of the company’s name, brand name, logo, trade mark, house crest or any design which would enhance the bottle label or container. These Printed biodegradable secondary seals are sold to many market sectors, pharmaceutical – used in labs, Food, drink and cosmetic and perfect to stop the ever increasing problem of counterfeiting.

Before you proceed with a new printed design, Viscose will supply artwork as the design would appear on the finished viskring / celon. Ideally good quality artwork should be provided to Viscose to work from. Tubing up to 144mm FW can be printed but the maximum size of design for printing is 95mm on one or two sides.

END_OF_DOCUMENT_TOKEN_TO_BE_REPLACED

Plant-Based Cellulose Super Material is as Stiff as Steel

Recent scientific findings into investigations in Cellulose, have unveiled the remarkable structural performance of plants could completely change what we think of as ‘green architecture’. Researchers at Purdue University who conducted an experiment on cellulose nano-crystals concluded that the material, which is the structural basis of plant life, has the stiffness of steel.

This bio-Cellulose, which we use to make our viskrings / celons is found in plants, vegetables, algae and some marine organisms and bacteria. According to a recent experiment conducted at Purdue University University in Indiana, this material could be the ultimate renewable resource, particularly since it is so abundant and produced as waste in the paper and food industry. Cellulose nano-cystals are a potential alternative to carbon nano-tubes, polymers and concrete.

When the researchers tested cellulose nano-crystals during the Purdue experiment, they found that this seemingly fragile material is only 500 nano-metres long, but exhibits the remarkable stiffness of 206 gigapascals – the same as steel.

Because of the tiny sample sizes, testing this material was impossible in the past. This time the scientists used quantum mechanics to unlock the super material’s potential, a scientific breakthrough that could open the door to a future in which all architecture could mimic the structural performance and behaviour of plants.